August 18, 2017 update: The site is back on the normal web at https://dailystormer.lol/

October 2, 2017 update: After a number of shutdowns and reappearances at new domains, at time of writing the site is available at https://dailystormer.cat/ as well as on the dark net as below. Several registrars succumbed in turn to political pressure.

The vile, hate-filled, anti-White, anti-free speech Jews have been exploiting their economic and political power to shut down free debate. First the web domain host GoDaddy, and then Google, have withdrawn support for the mighty Daily Stormer's domain dailystormer.com, following pressure from Jews such as Amy Siskind. And then Cloudflare made the decision to censor. Those who need to shut down their critics confirm that those critics are truthful.

Here's how to access the Daily Stormer via Tor.

Download the Tor browser, which works on Microsoft Windows, Apple MacOS, or GNU/Linux without needing to install any additional software. It has the benefit of preventing sites you visit from knowing your physical location, and allows you to visit blocked sites.

Then use the Tor browser to go to: http://dstormer6em3i4km.onion/

If it doesn't work at first, try refreshing, and try clicking on the green onion in the top left corner and selecting "new identity".

For status updates, see AndrewAnglin on gab or weev on gab.

What actually happened at Charlottesville is that peaceful Alt-Righters had a permit to assemble, in order to advocate for the rights of White people and the right to free speech. The permit was illegally revoked by Wes Bellamy, the Black Vice-Mayor of Charlottesville, and was then reinstated with the help of the ACLU. The authorities then declared a state of emergency so that they could deny the Alt-Right the right to set out their point of view, and the police herded the pro-White protestors towards the antifa terrorists who were armed with baseball bats and throwing urine and excrement, setting off violence that could be used to justify the state of emergency.

See this video for footage and further details of how the police caused chaos.

Meanwhile, and we don't know the full details of this yet, James Alex Fields Jr. drove his Dodge Challenger along a street in which antifa members were jaywalking and protesting without a permit, and one of them, Heather Heyer, died of a heart attack after a road traffic accident. It is not known to what extent Fields was to blame, but the mass media version of events is totally one-sided.

What is clear is that there was an element of panic, and antifa members were attacking the car with baseball bats. Did Fields set out with an intent to kill? Or was he hoping to taunt or scare them, but panicked when armed antifa thugs began attacking his car? If someone is innocently driving along in a car and is then attacked by armed terrorists with baseball bats who are smashing in the windows, the driver must have a right to self-defense by driving away. And if any of the thugs are killed or injured in the melee, it should be seen as an occupational hazard for domestic terrorists, and a weeding out of useless eaters and oxygen thieves. There is undeniable video evidence that the car was attacked before it ploughed into communist protestors, and Fields quickly reversed to save his own life.

The Jew-media have painted a picture of 'innocent' counter-protestors against 'evil' "neo-Nazis" and "White supremacists". Donald Trump offers a much more balanced view, saying that there were some "very fine people on both sides". The fairest view would be to say that most of the Alt-Righters were very fine people, Fields is likely to be an exception to that, the antifa had many violent thugs amongst their ranks, and a few well-meaning but misguided people were amongst the counter-protestors. What is undeniable is that the version of events asserted by the Jew-media is a total distortion of reality. 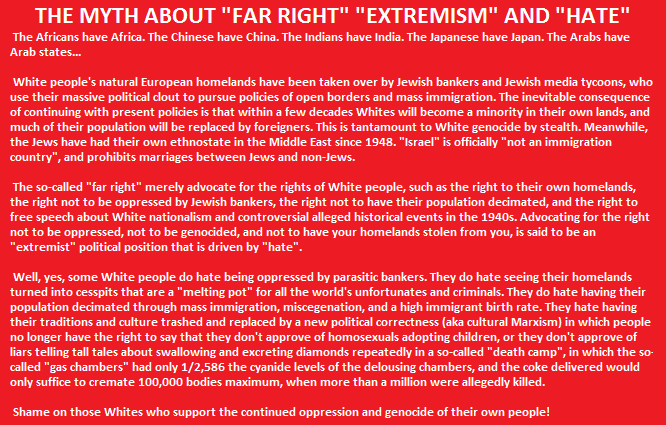 Take Our World Back!